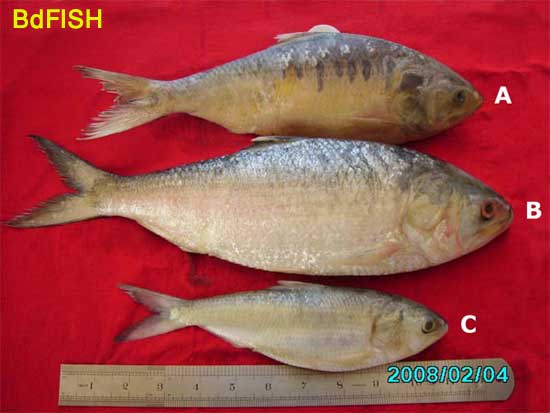 Ilish or Hilsa is the national fish of Bangladesh. It is a very tasty and delicious fish. Its natural habitat is the estuaries or the seas. But for breeding purposes it has to come to the upstream or rivers. Once, this fish was abundantly available in the river Padma near Rajshahi. But because of the construction of the Farraka Barrage in the upstream there has been the less flow of water in the Padma and as a result there has been the dearth of turbidity, depth and water current. So this marine or estuarine fish does not ascend the upstream for breeding in this line. At present the main hilsa landing centres are Chandpur, Chittagong and Barisal. The scientific name of this fish is Hilsa Ilisha (Hamilton –Buchanan, 1822).

There are three species of this fish such as H. ilisha, H. keele and H. toil. Of all these 3 species only H. ilisha comes to the upstream of the river Padma, Meghna or Jamuna for breeding. All other species of Hilsa i.e. H. toli and H. keele are marine. There is another species of hilsa known as Tenualosa ilisha but this species is found in the middle or mid region of the Bay of Bengal near Sri Lanka. These two fishes i.e. Hilsa ilisha and Tenualosa ilisha resemble each other but the only morphological difference is that H. ilisha is spotless and the whole body is smooth while the body of T. ilisha is spotted dorsolaterally. There are 6-7 elongated spots in this fish. (Fig-1). All other genera and species of hilsa are marine and they also breed in marine environment. There was no controversy regarding the naming or nomenclature of this hilsa or ilish fish till 1970s. The controversy arose when Shafi and Quddus (1982) described this freshwater/Ganges/Padma river shad as Tenualosa ilisha. They without giving taxonomic keys described it as T. ilisha, probably following Whitehead (1965, 1985) who in the name of revision described this freshwater shad as T. ilisha. Now let us see scientifically which name is valid for this fish.

The specific name of this fish ilisha was first proposed by Hamilton-Buchanan in 1822. Later on Cuvier in 1878 and Hamilton-Buchanan (1822) named it as Clupea ilisha. The fish was also named as Clupanodon ilisha by Lacepede (Hamilton-Buchanan, 1822). Regan (1917) found that this fish is different from other marine hilsas. So the generic names Clupea, and Clupanodon were retained for other marine fishes. He proposed the generic name Hilsa for this freshwater Gangetic shad. Fowler (1934) proposed the generic name for this fish as Tenualosa. Munro (1955) described the marine and freshwater hilsa fish of Ceylon as Tenualosa ilisha. Bhuiyan (1964) described this fish as Hilsa ilisha. He also mentioned in his book that Munro named this fish as Tenualosa ilisha collected from the marine and freshwater environment of Ceylon. Bhuiyan et al. (1992) described the fish as H. ilisha. All other authors of the sub continent such as Alikhunhi, Hora, Nazir Ahmed, Jhingran (1975), Rahman (1989), Talwar and Jhingran (1991) described the fish as Hilsa ilisha. Rahman (2005) in the revised edition of his book mentioned this fish as Tenualosa ilisha, probably following Whitehead (1965, 1985). The freshwater shad i.e. hilsa is spotless and the whole body is smooth while in Tenualosa there are 6-7 dorsolateral elongated spots (Fig-1). These two are distinct species. If Shafi and Quddus; Rahman and Whitehead want to accept this freshwater shad as Tenualosa by discarding Hilsa then what is the other fish for which this Hilsa name has been retained? Because the name Hilsa was first proposed by Regan in 1917 and Tenualosa by Fowler in 1934. So according to the law of priority the name Hilsa remains valid and Tenualosa is discardable since both these names are given to the same fish. I have collected few individuals of Tenualosa ilisha from Rajshahi fish market which were caught along with Hilsa ilisha. Probably these fishes migrated towards the north of the Bay of Bengal and caught along with H. ilisha.

Here I want to mention that our major carp rui was once named as Cyprinus rohita. But when it was found that Cyprinus is a distinct genus of European carp which is different from our rui fish so later on it was named as Labeo rohita. But Cyprinus genus was not discarded; it has been retained for the Euroean major carps. The genus Hilsa can not be discarded since it is not retained for other fish. The genus Tenualosa is to be discarded since it was proposed later by Fowler, Munro retained this genus for Srilankan ilish. He did not find any fish of the genus Hilsa in Sri Lanka. So in conclusion we should say that the scientific name of Tenualosa ilisha is the spotted Sri Lankan ilish. Bangladesh national fish ilish is Hilsa ilisha and not Tenualosa ilisha.

N.B. At first this feature was published on the old site of BdFISH at the date of 11 June 2008.