Pen culture is started in the river Boral of Bagatipara Upazila, Natore, under the project “Fisheries Development and Management of Sora and Beel in West Region of the Country”. This project is formally remained from 2006 in Bagatipara. Now the 2nd phase of the 10 years duration project is implementing. A total of 48 water resources are distributed to the fish farmers in this project for culturing fishes.

Bagatipara Upazila covers 387 acres of the river Boral of which 57.40 hectares are being used for pen culture. 57.40 hectares of water area is apportioned to the 11 fish farmer communities and the total benefited farmers are 321 in number.

At a certain time of the year, especially from January to May, fish farmers prepare their pen and culture fish. They usually stocked larger size fish (generally of weight between 0.5 and 1.0 kg per individual). Farmers got success from this type of project and they are trying to fulfill the fish requirement of growing population of the country by proper utilization of unused aquatic resources.

U.F.O. (Upazila Fisheries Officer) of Bagatipara K.M. Abdul Halim has said “This exertion by the government has taken cordially by the fish farmers. They are trying to get economically benefited by culturing varieties of native and exotic fishes. Besides, they are playing an important role in the fulfillment of fish demand and also in GDP. In this project, the government has given 70% schemes to buy essential inputs such as boat, net, fence etc. in the 1st stage to motivate the farmers. Although schemes amount is reduced in the 2nd stage, but overall outcomes from this project is hopeful.”

We perceptibly talked with Mr. Arshad Ali, a fish farmer involved in this project about the strategy of pen culture. He is one of the members of ‘Dayarampur Bahumukhi Matshay Kollan Shamiti’ which has 25 members. He has told details about the pen culture pattern, cost-benefits, and advantages-problems.

27 hectares of water area were allocated for their co-operative society. They have started fish culture in the year 2006. Cultured fish species were both native and exotic carps which are as follows:

Arshad Ali also said “among these fishes, growth rate of black carp is the fastest and bighead carp is the most profitable species, as 60% of the total profit comes from bighead carp.”
Feeding system is same as of the pond polyculture system. Farmers apply cow dung, poultry excreta or droppings to grow natural foods in the water. They also use wheat bran and mustard oil cake as supplementary feed. They do not apply any inorganic fertilizers.
Mr. Ali has given crucial data of cost-benefit statistics in the year 2006-2007 of pen culture which is presented below-

While culturing fish in pen, the farmer community facing some problems. The problems are described here under two headings-

Due to some own created problems and mistakes, fish farmers delayed to start their culture in the next season. So they get comparatively less profit than that of previous year. Farmers said that the government patronizing enough. But public problems are the major problems. They believe that if they can get proper solutions of these problems and utilize the opportunities; they will be able to produce more fish and fulfill the requirement of animal protein for the nation. It is very hopeful that the farmers have great eagerness to continue this type of fish culture. 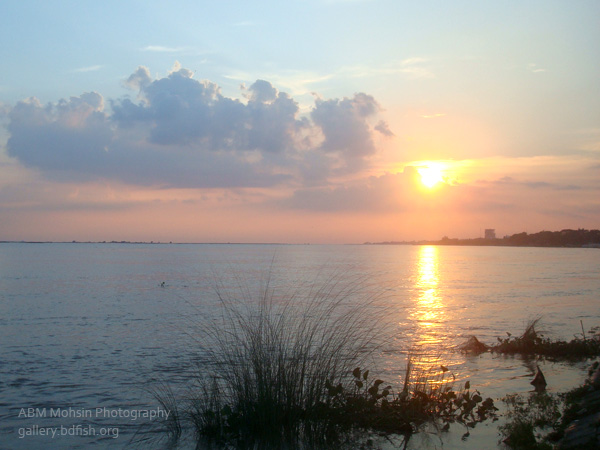 Our Rivers: Safe for Aquatic Lives or Not?

Fishes of the river Padma near Rajshahi, Bangladesh: Part-3