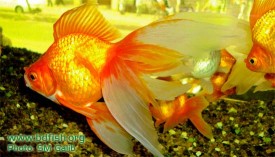 Bangladesh is a land of river and she has a diverse fisheries resources.  There are 260 freshwater species, 475 marine water  species,  24  fresh  water  prawn  species,  36  marine  shrimp  species  and  crab,  snail, mussel, turtle, etc. in our water body (DoF, 2010). Freshwater aquaculture, coastal shrimp, fresh water prawn culture and marketing, crab marketing, etc. are the major subsectors of fisheries in Bangladesh.  Nowadays  farmers  and  investors  are  very  much  interested  to  move  their business to more diversified fields such as crocodile culture, pearl culture, aquarium fish trades, etc. (Mostafizur et al., 2009). Aquarium or ornamental fish business is becoming very popular throughout the world as its easy operating system and less operating costs. Beyond sales of aquaria, air pumps, food, medications and other supplies, the primary product of the aquarium industry is fish (Cheong, 1996).

The aquarium fish business results in rapid cash production and cash and is relatively easy to start as a hobby or small scale farming enterprises. Aquarium fish trade is an expanding multi-million dollar market with considerable growth in the last two decades (Cheong, 1996). The approximate global import value of aquarium fishes is US$ 321 million (Dawes, 2001), from which US$ 21-48 million belong to the marine aquarium fish trade (Wood, 2001). The global wholesale value of live aquarium fish in 2000 was estimated by FAO of the United Nations to be US$ 900 million with a retail value of US$ 3 billion (Whittington et al., 2007).  USA, Europe and Japan are the largest markets for aquarium fish but more than 65% of the exports come from Asia. It is encouraging news for the developing countries that more  than  60%  of  the  total  world  trade  goes  to  their  economies  (Ghosh  et  al.,  2003). Although Bangladesh has huge resources but is still in a marginal position (Mostafizur et. al., 2009) and the majority of the shops of aquarium fish are located in Dhaka city (Galib, 2010a).  But it is good news for us that its trade is developing currently in our country (Mostafizur et al., 2009).

Bangladesh has a long history of introduction of ornamental fish species. Unfortunately, no consideration and no quarantine measures adopted during import of this species and as a result they were introduced into the country without proper documentation. Information such as published lists of useful and harmful effects; published scientific data on the ecological and economic impacts of such species are not available. Despite the absence of studies, it is hardy to identify the accurate time of the introduction of ornamental fish.

History shows that the Siamese Gourami (Trichogaster pectoralis) was first introduced into Bangladesh brought from Singapore in 1952. Then the Goldfish (Carassius auratus) was introduced into Bangladesh brought from Pakistan in 1953. At first it was used as recreational purposes in aquaria and cement tanks. (Source: Department of Fisheries 2001, Matshya Bhaban, 13 Shaid Munsur Ali Sharani, ramna, Dhaka)

In Bangladesh the professional culture of aquarium fish was started in 1980. At first aquarium were set in restaurant for aesthetic enjoyment to attract people. Then the rearing of aquarium was practiced in shopping centers. Generally elite people keep aquarium in their house or office for their aesthetic enjoyment. The ornamental fish culture practice was increasing day by day. Due to the increasing demand, aquarium fish culture was oriented in mid 1980, at Kataban in Dhaka (Mostafizur et al., 2009).

Bangladesh  has  a  richness  of  natural  resources  such  as  suitable climate,  natural  rivers  and  traditional  experience  in  the  culture  of  fish  so  that  the Bangladeshi farmer can readily culture aquarium fish. Considering the importance of this newly emerging field, many farmers are involved in aquarium fish trade and Aquarium fish business became very popular in many cities of Bangladesh such as Rajshahi, Khulna, Jessore etc. There are vast opportunities of aquarium sector not only in the local market but also in world market. But, it is still couldn’t develop according to the desire of the consumer as well as the provider.

Most of the aquarium fish shops are found in the capital (Dhaka) and other major city (such as Rajshahi, Khulna etc.) of Bangladesh. The majority of the shops of aquarium fish are located in Dhaka city (Galib, 2010a). Katabon market, the most common and popular market in Dhaka city for aquariums and other aquarium products like aquarium fishes, aquarium foods, chemicals, toys, plants etc. (Galib 2010a) found that at least 30 aquarium shops are available in Katabon market of Dhaka city where all kinds of aquarium products can be found. In  another  study, (Galib, 2010b)  stated  that  there  are  only  2  shops  in Rajshahi city, while 12 shops are found in Khulna city. Mostafizur et al. (2009) reported that 12 shops and 7 breeders have been found in Khulna district where 29 different aquarium fish species  were  marketed  of  which  12  species  were  bred  for  fry  production.

Rahman (2005) recorded at least 25 aquarium fish species in Bangladesh. A total of 78 varieties of exotic ornamental fishes were identified under 45 species, 41 genera (excluding 2 cross-bred), 18 families and 5 orders (Galib, 2010a). Majority fishes were introduced from Thailand and no true quarantine measures are used at the time of introduction. Artificial breeding techniques of at least 17 varieties of exotic ornamental fishes have been developed by amateur fish breeders (Galib, 2010a). According to Mohsin et al.  (2007)  there are found about 12 exotic and 2 indigenous aquarium fishes in Rajshahi city. There are found about 30 species of aquarium fishes in Khulna district (Mostafizur et. al., 2009).

Table 1: A list of available ornamental fishes in Bangladesh are given below:

At first generally the elite people keep aquaria in their house or office for recreational purpose. But the system has been changing day by day. Rich people and higher middle class people now keep aquaria in their house as a symbol of status. Besides this, now aquaria are kept in the high quality diagnostic centers, some educational institutes, shopping centers, cinema halls, seminar and conference halls etc.

Ornamental fish business has a great opportunity in our country as well as in the world market. But unfortunately, in Bangladesh the trade of ornamental fish is confined to its own territory till now. We have huge resources, suitable environment and a demandable market in our country. A little conscious may bring huge profit in fisheries sector. Most of the fishes of ornamental fish imported from foreign country and it costs a lot of money each year importing ornamental fish to meet the requirement of the country. We have a great variety of colorful indigenous fish species that may be used as ornamental purposes and can save these money and apparently can be regarded as a very potential mean of export earnings. If we bred them properly and export them, then we earn a lot of foreign exchange for our country.

Table 2: Some of the potential indigenous ornamental freshwater fish and non-fish species

Ornamental fish culture is now a high demandable job or profession in the world market. The prospect of aquarium is very bright in near future for our country. As a profession, the activities of aquarium preparation are very feasible and educated and entrepreneurship involvement can increase the prospect of this work. If we breed the native as well as other ornamental fishes which are imported from various countries; may build ornamental fish hatchery and produce commercially ornamental fry and can save a lot of money every year.. Besides this, aquarium feed and other appliances related to ornamental fish culture are grow-out as a subsidiary business. These will increase job opportunity and employment of many people.

Tourism is one of sources of foreign exchange in our country. We have many tourist spots. We can keep aquarium in the public place, show room, high class shopping center, gymnasium etc. these will attract people and increase the value of these places. Besides this, exhibition of ornamental fish can be taken at different place of the country. In this case, feed are provided by the viewers. But they should buy that feed from the exhibition center. This will also increase the demand of ornamental fish culture.

There are some problems present in the aquarium fishes business in our country. Some major problems are given below:

To overcome mentioned problems and to achieve the goals, we should put great emphasis on the following recommendation:

The ornamental fish sector is a widespread and global component of international trade, fisheries, aquaculture and development. However, the scope of this sector is vast in our country, but we cannot go ahead because of unconsciousness, lack of knowledge, lack of care of government and non- government institutions. This sector should be given priority with extra care because it may earn a lot of foreign exchange every year by exporting the native ornamental fishes that remain unused in our country.

Past and Present Status, and Prospects of Ornamental Fishes in Bangladesh